I am going to tell you the pets I had my heart set on when I was a kid. (Cut me some slack - there is *SO* nothing going on here ) 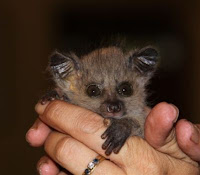 My most fiercely desired was a bush baby
With its humungous eyes and clingy little hands.
I gave my parents a hard time about that for yonks.
What cooled my ardour eventually was finding that they have a habit of weeing on their own hands.
Ew.
Then there were those teeny monkies. 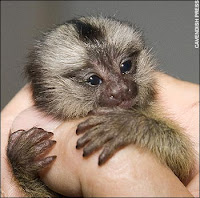 They fit into a teacup -
I'm a pushover for miniatures of any kind - (except those minute hairless dogs with the bug eyes).
Lastly a baby buck, with its huge sad eyes and fragile knock kneed legs.

I remember the daydreams about owning and raising these animals . . they were fabulous!
What I did get were: dogs, cats, rabbits, white mice, which were forever producing babies, a duckling, budgies, canaries, guinea pigs, a squirrel, a tortoise that would come when I called him (Kerry) and eat out of my hand, and a shrew (very temporarily - shrews can't live in capitivity, as we found out too late).
Which is a lot.
But not my top three.
Anyone else have odd pet wishes?
Posted by allie. at 8:51 PM

I never really had pet wishes until I saw this post. A little bushbuck, a hedgehog and a tortoise would do me nicely.

LOL! Now you know why the bush baby has clingy hands:)

We were a "no pet" family growing up. I wanted a Sharpei because of their wrinkles...and got one a few years ago.

I wanted a umbrella cockatoo...but they are also way to messy...and I don't like messy.

I wanted a baby tiger or a baby gorilla and I also used to look for abandoned children everywhere I went, just in case I found any poor souls to mother.

I have always been crazy about all types of babies.

Oh yes and I also REALLY wanted a gummi bear! Once my mom dropped Nics and I off at a friend while they moved house and she said when she picks us up again she will have an "alive" surprise for us. Well, we were CONVINCED it was a gummi bear and told our friends this. But...it was a puppy. Ha, ha! We loved her too, her name was Miss Twink from "The yearling" did you see that programme? The little boy in it adopts a baby bush buck like in your pic.

I was the opposite I wanted BIG pets tigers, baby elephants, lion cubs - stupid! I still love big animals - my fav! Hope you are having a fab time!