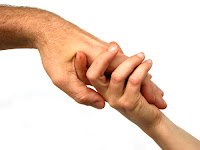 "Jesus had an uncanny ability to look past the obvious flaws in people's lives and envision who they could become if the power of God were released in their lives. Intrinsically, He just wondered about people. Wondered what they could become. Wondered how they might look in a transformed state. Wondered what impact they could have if their lives were invested in things of eternal value. He somehow saw the godly worshipper clothed as a worn, weary prostitute. The faithful disciple hiding inside a fisherman called Simon. The hidden philanthropist in the life of a crooked tax collector named Zaccheus. The risk taker in a cowardly Jewish ruler named Nicodemus. What a fantastic gift He had for seeing what nobody else could see! "All things are possible" was Jesus' mantra. All things. And countless lives were trnsformed because He chose to look past surface stuff to see what was ultimately possible." This is a passage that I have up on my study wall to remind me.* Just reminding me of the right way to look at people. I need that reminder. I fall so easily into the trap of making superficial judgments. But, "All things are possible" - change is possible . . . * Unfortunately did not note the title and author of the book!
Posted by allie. at 6:51 AM

I took the liberty to google your quotation and found the title of the book and its author! It's 'Just Walk Across The Room: SImple Steps Pointing People to faith' by Bill Hybels...

Very lovely passage....And so true! At the same time, how do we know how much we should accept, or when do we know there is nothing there to hope for? It reminds me sometimes, of how us women, we fall in love with men that hurt us and make us feel bad but still we want to believe there is more to that, or that beyond that there is a great man, or that he will come around... it is always a struggle for me when it comes to give an advice on relationships-well besides that one should just nod and pray!! What if there is nothing more than what you see?
Still, I tend to live my life following this quote Allie...well can't really change the person you are!!!
Enjoy your trip...

Great quote and indeed something I could be reminded of daily.