I mentioned some time back that I was going to work my way through The Artists Way by Julia Cameron this year.
I'm actually doing it.
(Faint!)

One of the tasks I'm tackling is telling a story.
I'm going to make up a random, off-the-cuff story right here, right now.
Here I go:

Life had stalled for her.
There was no pulse-racing purpose ahead of her when she woke up
Well, no purpose at all really.
Retrenched, divorced, past middle aged, she felt hollow, unnecessary.
An add-on to life.

The first day of no work to go to.
She could lie in bed all day if she wanted to
No one would know
No one would care.
But she dragged herself through the routines of morning and set out with nowhere definite to go
Just walking.

The idea of job hunting seemed laughable.
She wondered if she had offended some deity that all this disaster had come her way.
How it was that life for some people seemed to go so well, flow so effortlessly - and for others, like her, the complete opposite?
So random, it seemed . . .

And if that were so, was there any reason to hope things might get better for her?
And so, head down, heart lower, oblivious to the beauty around her, she trundled on.
Coming to a bench at the side of the road, she sat down gratefully.
After all, the day was long and very hot; she couldn't walk all day.
She sat there, drowsing a little, then -

To her astonishment, she noticed a tiny figure climb up the leg of the bench, obviously intent on getting to her.
She rubbed her eyes and looked again
No, it wasn't her imagination - there it was.
No bigger than her forefinger and dressed in green tights like a leprachaun.
Agile too. 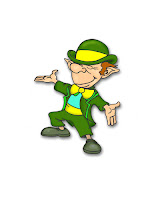 She looked around to see if anyone else had noticed her visitor
But the area was deserted.
By now, he (she could now see the figure was a man) was standing next to her knees looking expectantly up at her.
"Well?" he asked, seeming to believe she would know what he meant.
Blankly she stared at him.
"Well?" a bit impatient now.

She looked helplessly at him
"You wanted help, didn't you?" he mouthed it out carefully, as though he thought she might be a little slow.
"What can I do for you?
I am only allowed a few moments to talk to you, you know. There are so many heart-cries going out; its a really busy time for us, so we can't take too long on each case."

She swallowed hard, believing she must have fallen asleep, was dreaming.
But even so - why not take the chance?
What did she want?
How many things could she ask for?
She felt it would be bad manners to ask, so she wrestled in her mind with priorities.
Supposing there were only one chance - what did she want most?
A job? Money? A husband? Youth? More wishes?
What?

"Come on now, dearie, I haven't got all day, you know" he chided her, mopping his brow with a tiny green handkerchief.
But she could not make up her mind
Counting her desires over and over in her mind, like a miser with his money.
As she did so, they bloomed and grew into all kinds of dreams.
She got lost in her fantasies of what all it could mean for her . . .
But which?
Which to choose?!

Eventually, she looked down at the tiny benefactor.
Only, he wasn't where he had been.
She traced his pathway up to her - he wasn't there either.
Nowhere to be seen.
Had she been dreaming after all?

She sprang to her feet and as she did so, a tiny green handkerchief slipped from her lap on to the hard stony ground.
Posted by allie. at 6:03 PM

Love it. so unexpected. and begs for more! (which doesnt mean you have to write more ... just that it leaves you with lingering thought!)

Wow...you were born to paint and write...we want more!

Thanks so much, guys!
You motivate me. XXXX