I had a surreal experience this morning

I will have to back up 20 + years to tell my story though.
All those years ago I met a young boy of colour, who frequented the local supermarket's parking area, offering to help with carrying packets and parking trolleys, in the hopes of a tip.
He was probably about 8 at the time; a shy, sweet faced lad with a bright smile.

Because I shopped regularly there, we developed a kind of friendship. I used to chat to him about his family situation (mother was in hospital with TB and he lived with relatives); I invited him to the children's church meetings and I specially remember one time I bought him a toothbrush and toothpaste and advised him to look after his beautiful teeth!
He never did come to the meetings and over time he disappeared from the supermarket grounds.

Some years later he re emerged as a street kid, dirty, cheeky, obviously using some kind of drugs: always hanging around the main street begging.
To my horror, this lovely boy had become a scary young man; worse, he seemed to be able to spot my car among dozens and always made a bee-line for me, harassing and pleading. 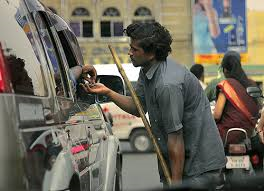 My husband, for years had warned about this 'friendship' with this lad and warned that it was going to backfire.
Now it had.
But I still felt sorry for him and often helped him out.

Things came to a head when he changed his begging zone from streets to the parking area of the mall I shop. He seemed always to be there, making my life very difficult.
Eventually my man laid down the law to me and said "NO MORE. And tell him, no more"
So when this kid (now probably in his mid twenties) popped up as soon as I parked my car there, I told him "I will buy you a meal today. But after today, you must never ask me again. Ok?"
He agreed. I bought him the meal.

This was some years ago.
I still see him often
He continues to lurk in the area; in fact has become addicted to drugs and is downright terrifying.
He has spent time in jail and is often reported for terrorizing motorists, threatening them if they do not help him.

This is all background to the surreal experience I mentioned.
This morning, as I pulled up at the red street light, I saw him there: near him was another man who looked like a clone of his.
Scrawny, dirty, ragged, Rasta hairstyles, they were both hanging around waiting for the cars to stop so they could make the drivers their hapless victims.

The other guy made straight for me and began yelling at me through my closed window. I looked straight ahead of me: in our neck of the woods we know that making eye contact with these drug addicts is fatal.
To my utter amazement, the guy that I had known all these years came to my car, took the first guy by the arm, and without a word, moved him away from my car to another one behind me.

I was moved almost to tears.
It touched me so deeply that this guy, in the midst of his messed up life; his drug-addicted thinking, should display integrity.
Even if it happened only this once and never again -
He did something kind and sort of honourable.

I found myself misty eyed, praying for him,
There is always hope -

That just made me cry.

Your blog post touched me deeply. There is just so many people in dire need out there. So very lost, so in need of the Lord's love and saving grace...and yet they are caught up in a life where they don't even know that there is a way out.