Of Leavings, Mad Hats and Performings

Huge changes for our family this week in that our eldest has moved for a lengthy stint to Luxembourg
Now while this is obviously a wonderful opportunity (I mean, who gets to go and live there!?), it is also a little like splitting the atom for us: our family is very close.
So we have this dichotomous emotional situation of being thrilled for them and feeling the massive gap that their leaving has caused.
I know that the majority of South African mamas have had to face this situation before (as have I some years ago when my youngest left SA for the States and was away 5 years) but that doesn't make it a walk in the park.
However, the photos that are coming back from Luxembourg show a beautiful city and the conversations via Skype have been full of excitement and tales of discoveries

On a completely different note, I was invited to my 2nd juniorest granddaughter's Mad Hatter's Reading Tea Party for grandparents.
Which obviously necessitated a mad hat.
My hats are not mad.
They are utilitarian to the point of boredom.
Some creative effort was called for.
So paper, sticky tape, scissors, tinsel, paints and brushes later
And voila! a mad hat! 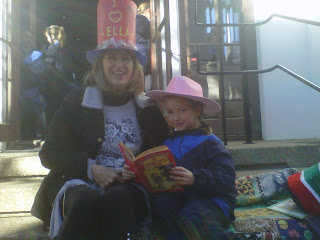 The older branch of sprogs had their much looked forward to Morning Market recently, which included "things happening on the stage" involving all three of them.
The middle child is mad about dancing: does modern, tap and, until recently, ballet.
So she, talented little thing that she is, was much in evidence.
Here are a couple of shots of her (the red head with plaits) doing her thing in the tap routine. 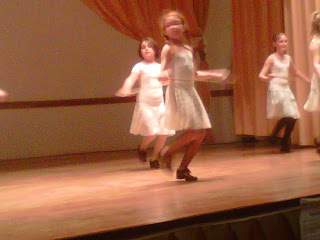 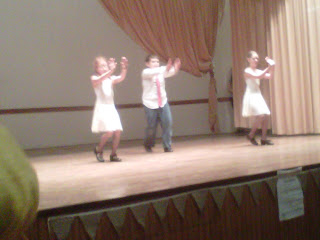 Here her older sister steps up to read a long speech in front of the school and all the market people.
I am always amazed at the composure of these very young performers!
I tried to get a shot of their young brother but he kept hiding behind the other kids!

So sad that Lisa and her family had left...but also exciting for you to go and visit and explore their new surrounds.

I love the photo of you in your "mad" hat...and your love for your grandbabies echos mine.