My father-in-law aged 84 has been having regular blood transfusions for months now
He has kept us in the tortuous loop daily (sometimes lots more) about his platelet and haemoglobin levels -
The doctors have told him that his bone marrow has stopped functioning completely.

Yesterday he reported for another transfusion because both sets of figures had been way down again the day before.
Only to find that when they reran the tests that the levels had risen to very satisfactory levels
With no medical intervention!

The doctors told him they have no explanation but his bone marrow had started functioning again!
Today, for the first time in months, he had colour in his face, his voice was strong and opinionated again and his tread much firmer.
He seemed to have come back from the (nearly) dead.

We have just returned from 6 hours in the car with him and my mom-in-law as we took them into the country to visit friends.
For my local (SA) friends, we were near Citrusdal.
It has been a scorcher - 37 degrees in someplaces -
Normally the two of them drive us demented when we take them out because they bicker incessently and loudly like two bad tempered children
Only with a vocabulary unusual in elderly folk . . .

They complain constantly, and keep wondering where people get the money to do everything from buying new cars to piling their shopping carts.
It sounds funny but can get very wearing, I promise you!

Today -
None of that!
Smiles, good humour, appreciation -
Its another miracle
Two in one day!! 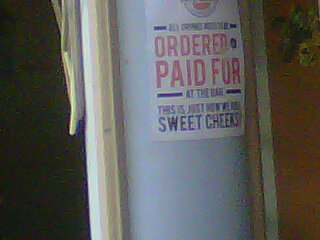 It says: "
All drinks ordered and paid for at the bar
This is just how we roll, sweet cheeks"
The temps have been high, the drive long
So this will have to do suffice for today . . .
Hasta la vista amigos!
Posted by allie. at 6:21 PM

God is good...all the time.