Unity has been much on my mind the last week or so.

There are many fine churches in the Valley where I live.
Our church felt that they were being led to launch a site here anyway; to stand shoulder to shoulder with those who've been here for ages and to work alongside them.
Hence my thoughts about unity.
Unity inside individual churches, and unity between the churches themselves.

I realise now that I had all kinds of lofty notions about the concept -
Seeing us all, kind of from afar - in a mistily beautiful way, wafting around, unified.
Like a love story movie, in soft focus . . .

Of course, I only realised that I'd been thinking like that because I hit the ground with a bump. 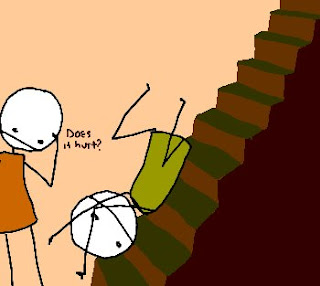 Reality check.
God will do that sometimes.

Let me explain:
On that very same Sunday evening of the launch, DH and I had a row -
Over the silliest thing.
It was my fault: I took exception to something he has done many times
But this time it really got up my nose
And I muttered under my breath about it as he went out of the room (something I also never do)

This is the man who usually can't hear me unless he's in the same room with me and I raise my voice!
He re-entered the room, and the argument was on.
Round and round we went on this ridiculous roundabout
Both knowing we were getting nowhere, except mad.

We made peace
But I felt bruised and miserable for a while
What a lesson for me, the "passionate about unity" one
#blush#

Yes, it is lovely to dream of what large scale unity might look like in the world wide Church
And to ponder on what the Lord might be able to do through us all if that were the case

But I see now, it starts very practically
And in tiny humblings
Unseen and seemingly unimportant . . .
It seems to me anyhow, that maybe it takes each one of us being willing to find a way to live in unity with those closest first (sometimes the very hardest thing to do!)
It looks impossible.
And anyway, unsustainable.

And it is, unless He does it for us.
But then we know that impossible is where the power of God comes into view -
"It is God who causes us to will and to do of His good pleasure"

I love being on this adventure - where helplessness itself is a springboard to seeing God at work.
If I just try to 'get it right' - I will fail.
But I can tell Him about it and He will make it happen.
I know it.
I have seen it many times.

The real reality of the God of creation bringing Himself to bear on our human lives.
There's nothing like it!

Indeed dear Meriel!
Thats why the 'tumbling down the stairs' picis so apt.

But there is something so bracing about being humbled by Him.
It leaves you feeling fresh and encouraged.
Amazing!

I am embarrassed (sort of but I know you wont berate me) that this went over my head?x

Mmm. I've been thinking much about how loving God & listening to Him starts with loving those closest to us, and listening to them. So your musings about unity beginning in your closest relationship make a lot of sense. If I can't love my husband - selflessly, respectfully, passionately - honouring him when I'm irritable or just don't feel like it - how can I pursue loving & honouring God? Even though God is all Spirit, He delights in us using the human context He's given us (for now) to demonstrate what He's teaching us. And it's often tough! :-)

Ouch! Isn't it amazing how quickly we forget sight of the big picture. He is so amazing, we have to be in the place He called us to and then things starts happening.

PS: Whenever we are on the verge of a spiritual breakthrough K and I tend to get into fights with each other. I know I can't give the evil one the fault for this. It is purely by our own doings.

@ Jo - Don't be embarrassed -
Just Inbox me or email me and tell me what you don't get, ok?
I could have been guilty of using "Christianese", something I try to avoid.
Love + hugs

@ Viv -
I agree.
I am finding that I quite often need these checks because I tend to generalise + think in external broad terms about things.
They need to be brought "up close and personal" to me, so they can be appropriated.
Am I making sense?

@ Lynette -
Yes it is amazing!
And I can relate to the arguments happening at significant times. We experience that too

And no, we can't blame the evil one but I do think that there may be added temptation at those times, don't you?
And if one is not aware, one can just fall right into the trap.
Forewarned is forearmed though
:-)