Does God talk directly to people today in the way that He did in early New Testament days?
Its an intriguing question and people have varying opinions - sometimes very strongly held.

I am one of those who believe that He does, having experienced that "voice" a number of times over the years.
Most often He will speak through the bible but every now and then, He will speak to me personally, in the way I've learnt to recognise.
Unmistakably Him.

But when people ask me "How do you know its the Lord speaking" ?
"How would I recognise Him?" I've been at a bit of a loss to explain except to say that He will never say anything thats contrary to the bible.

Something I read today:
"Frequently I have been asked:
'What does the voice of God sound like?'
The best way I can describe it is that it sounds like the voice of conscience, yet of course it is much richer and the message it gives is more positive.
All of us have had moments when conscience has said to us: 'That was wrong,' or 'You shouldn't have done that.'
But the voice of God does not merely approve or disapprove; it encourages, reassures, informs and instructs. . . .
And when God speaks there is a quiet sense of authority." (Selwyn Hughes)

This is the best description I've heard so far.
Maybe it will be helpful to some of you who have puzzled over the same questions?

(Familiarising ourselves with what the bible says is wise, so we can test what we hear. Or we can ask seasoned believers to test them for us in the meantime.)

Its one of the many things that makes being a Christ-follower wonderful - we have a Living God who loves to communicate with us.
Like a good father with his children - think family closeness. 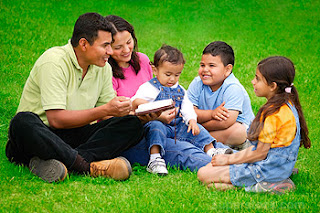 Then we'll have the merest whisper of what its like.
Posted by allie. at 1:16 PM

That still small voice is unmistakable. Lovely post my friend...I am so glad you're back

I love that description of Selwyn Hughes. That is exactly what is experienced when God speak to you (us).