A few weeks ago, I posted about an upcoming School Reunion and shared my very wobbly feelings about going.
Well, it has come and gone and I'm alive to tell the tale
And a very different tale it is from the one I expected.

When I first walked into the venue it looked as though my worst fears were going to be realised
Lots of totally unknown women standing in conversational circles.
All I saw was backs!
I thought I'd capture the moment for you blog buddies - 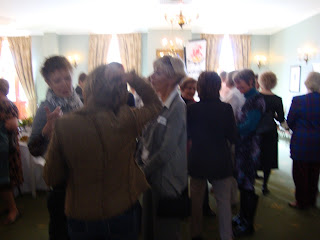 Of course, taking pics was also a fine way to cover my uncertainties for a while :-)

Soon I found myself talking to a girl that looked familiar to me.
Her name tag said Alison - you can imagine how easy that made starting a conversation with her!
I said to her: "You remind me so much of a girl named Dawn. I remember her well - she was a fantastic artist. Do you have a relation by that name?"
She smiled at me and moved her jersey away from her name tag
It now read: Alison Dawn . . . .
Bingo!

Gradually I found a lot of people I used to know -
We agreed we recognised mannerisms first and only then saw "the schoolgirl" we remembered.
Its so odd, but once you 'see' each other like that, time just rolls away and it feels as though you are back then.

Only for me, it was way better than back then.
Because they were so nice!
It reminded me of the time I became a Christian, way back in 1984
Suddenly I found that the planet was populated with fantastic women!
Where had they been all my life?!
And where had all the mean ones gone?

And, because you and I are old friends, I'm hoping that you will understand where I'm coming from when I entrust you with this:
The next day I got a phone call from the "head honcho" among the girls who told me that the girls had unanimously voted for me for some kind of 'status' thing.
(It must have been at some party post mortem since I was never even asked for my vote!)

We'll leave it there - but this is the point:
Jesus changes people.
That's what they saw
I know it
He knows it.
I hope that one day they will know it.

By the time for 'official' photos, we were as unruly a bunch as if we were back at school - the poor photographer had his work cut out to get everyone positioned.
The group pic which follows this is his handiwork
Lets forgive him for the blurriness - we gave him a hard time. 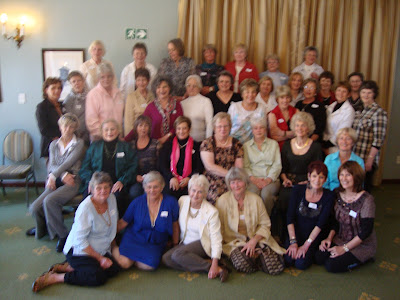 The decision has been made to meet every 5 years in future (in deference to our advanced years!)
Personally, I think its just an excuse to get together sooner.
Works for me!
Posted by allie. at 12:47 PM

Alison - are you sure you went to the right reunion? You look about two decades younger than the rest!

Amazing what we see in hindsight hey? What a great post.

I love it too...and you look so much younger than your old mates;-)

ohh soo cute family picture.
now following you.♥
hope you follow me too♥
from philippines with ♥
here's my url mr837.blogspot.com

Oh I agree - we all change. I just had my 25 year reunion and was at once stunned by how much and on the other hand how little people changed.